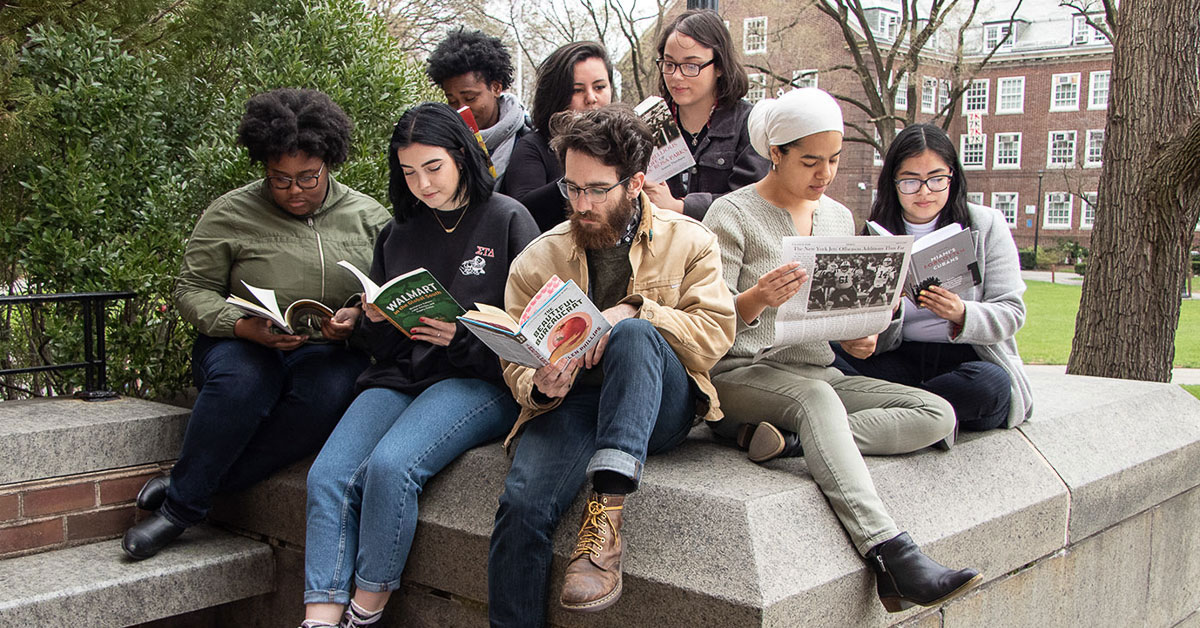 Brooklyn College students, before the pandemic closed campus, enjoy what U.S. & World Report called the most Ethnically Diverse Campus in the North Region for 2021.

The college was also found to be a leader in graduating students with the least debt and for being a social mobility engine in the North Region.

For the third straight year, Brooklyn College finished as the most Ethnically Diverse College Campus in the North Region—also earning the highest diversity index among all four regional rankings (North, South, Midwest, and West).
Other categories in which Brooklyn College was recognized included:

Brooklyn College’s Murray Koppelman School of Business — the only business program in Brooklyn that has earned accreditation from the Association to Advance Collegiate Schools of Business (AACSB) International — also was ranked 235th overall among more than 500 programs in the nation.

Brooklyn College was also recognized in the categories of “Students Having the Least Debt” (North) and “Economic Diversity” (North).

“Once again, Brooklyn College has proved to be a leader in offering high-quality and affordable educational opportunities for the diverse city it serves,” Brooklyn College President Michelle J. Anderson said. “We are grateful for this recognition that serves as a testament to our dedicated faculty, students, and staff.”

Brooklyn College has been a champion for supporting diversity since the institution was established in 1930. These rankings coincide with an important anniversary that highlights the College’s mission. This month, the Immigrant Student Success Office (ISSO) celebrates its one-year anniversary. Dedicated to helping immigrant and first-generation students graduate, its comprehensive offerings include faculty mentorship, financial aid advisement, free legal services with assistance from CUNY Citizenship Now!, as well as personalized counseling. As of June 30, ISSO has aided 360 students through these offerings. In July, ISSO received $150,000 in support from poverty-fighting organization Robin Hood. The Robin Hood Relief Fund grant provided $500 in emergency assistance to 300 immigrant students at Brooklyn College who have lost low-wage jobs or who have other COVID 19-related emergency expenses, such as food, housing, and technology for remote learning.

As the fall 2020 semester approached, Brooklyn College was also named to The Princeton Review’s 2021 edition of The Best 386 Colleges, along with a dozen New York City colleges that were highlighted. The college earned high marks for its diversity, professional development, variety of course offerings, innovative faculty, support services, and affordability, among other benefits.

Business Insider examined which 24 colleges from across the country provided the best return on students’ investment based on earnings and cost data, and Brooklyn College ranked 11th on that poll. Business Insider used the most recent available data from the Department of Education’s Scorecard that has such figures as cost of tuition, enrollment, and student debt, and created a ratio of median earnings from 10 years after first attending college to the average cost of attendance.

Money.com also sought to highlight schools that best combine quality and affordability in its “Best Colleges in America, Ranked by Value” list, and Brooklyn College was placed at No. 164.

Lastly, a new college ranking website, College Consensus, published the Best Colleges in New York 2020 using methodology that combined the most respected college rankings with student reviews, and Brooklyn College was recognized for its diversity.