Teaching in the Pandemic, Volume 8 | Number 1
Sponsored by
Chemistry

With a lot of patience, creativity, and a tenacity matched by that of their students, many professors made it through the spring semester. Over the summer, they upped their game and came back this fall with some new skills.

When the COVID-19 pandemic shut down much of the country last March, and New York City found itself at the epicenter of the storm, many Brooklyn College professors went through a range of emotions from anxiety to grief as they prepared to move their courses online.

“It was a different time in New York. Many of the faculty were shell shocked,” says Maddy Fox, assistant professor of sociology and director of the Roberta S. Matthews Center for Teaching and Learning (CTL). The CTL swiftly coordinated with the Academic Information Technology Office to train faculty members on various technologies and pedagogical strategies. “What they all shared was an urgency and a great deal of focus.”

The number of online courses that most of the college’s nearly 1,500 faculty members had taught before? Few to none. And for those who were more experienced with distance learning, retooling on a dime, on this scale, with a large group of students whose worlds had been turned upside down, was challenging, to say the least.

While many professors on the campus were comfortable enough using course-management systems such as Blackboard, and some basic videoconferencing platforms like Zoom, they were still left with syllabi suddenly rendered irrelevant, scrambling to adapt their pedagogy and translate skills that require a hands-on touch.

Still, the faculty powered through the semester. The CTL set up digital “communities of practice” channels where faculty from each academic school could share ideas, post resources, ask questions, and even post some comic relief in the form of gifs.

Retooling for a Remote World 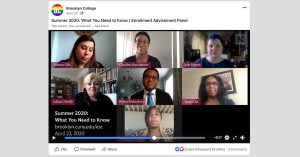 Reflections on how Brooklyn College has transitioned to a virtual environment.

Over the summer, many professors took advantage of the break to participate in classes on online course development offered by CUNY, the School of Professional Studies, and other providers. Others collaborated within their department to re-envision their approach and their assignments, and review the technology options. The CTL developed the BC Guide to Online Pedagogy, a certificate course that faculty can complete on their own time.

The college also received funding from two grants to facilitate faculty working on effective online teaching practices. One—from the Association of College and University Educators—supports 60 faculty members from across disciplines to work on their pedagogy throughout the year.

“We’ve learned a lot as a college because of this pandemic,” says Fox. “We’ve always had a few faculty who taught online, but we didn’t have a depth of knowledge on campus around online education. That has really grown.”

That’s a good thing, because CUNY courses have remained mostly online for the fall. And if last semester students forgave some of remote learning’s shortcomings, professors say it’s clear now that the expectations are higher.

“Last spring, students understood that we didn’t plan this. They gave us a pass if we didn’t have everything together,” says Brian Gibney, an associate professor in the Chemistry Department. “I knew going into this fall, given that we had time to prepare, students were going to be far more critical in evaluating whether they are having a true learning experience.”

The reverse is also true. Gibney says he has struggled with the best way to assess whether students have learned in the online environment, and how to maintain academic integrity in exams and quizzes. He says the department has come to terms with the fact that many students will have to pick up specific lab skills in later courses.

“Labs are designed to train students in the practical use of equipment and glassware and how to do practical manipulations,” says Gibney, who had already been looking into how to convert some aspects of his courses to online delivery before the pandemic. “That’s what’s being lost in this process.”

He ended up filming videos—starring himself—on the proper use of equipment for his courses’ lab activities, picking up some video and editing skills along the way, partly from YouTube.

“I film myself doing an experiment and then I take still photos that represent multiple data sets,” he says.

Gibney, who served as the facilitator for the “communities of practice” channel for the School of Natural and Behavioral Sciences, took two courses on teaching online through CUNY over the summer, which he says strengthened his pedagogy. He decided to film certain aspects of his lectures ahead of time—in 10- to 15-minute clips “so that students can binge-watch like Netflix”—and to spend most of his live class time answering questions and going over concepts.

Other professors learned some creative approaches to asynchronous delivery, realizing that having students take the lead on some aspects of the course has many benefits. One of those is that it doesn’t bind busy students to a specific time for a lesson. It also “can offer more opportunities for student participation,” says Fox.

Graciela Elizalde-Utnick ’87, M.S.Ed. ’92, an assistant professor in the School Psychology, Counseling, and Leadership Department, says if she never has to teach another online course after this pandemic, she will be grateful. But she will preserve some of the asynchronous tricks she picked up this semester, like having her students keep an e-journal and creating student discussion boards, two things she had not done before. For the discussion boards, she has each student post a question and has other students respond.

“They are engaging in this higher-level discussion about the readings before we ever get to class,” she says.

Another upside: She has nearly 100 percent attendance in her graduate courses. She even had a student with COVID-19 log into class from bed.

“She was all tucked in and looked so sick,” says Elizalde-Utnick. “I usually see some attendance drop off a bit in March or April when students’ lives get so busy. But because they don’t have to leave home, they end up making class now.”

Professors did have to be patient with the upheaval in their students’ lives. Many suddenly became essential workers, home-school parents, laid off, food insecure, hobbled by a lack of access to technology, and more.

Many professors noted the need to create multiple channels, such as text and instant messaging apps like Slack, for students to use, to be flexible with their assignments, deadlines, and delivery methods.

“It wasn’t just about making classes virtual,” says Laura Ascenzi-Moreno, an associate professor in the Childhood, Bilingual, and Special Education Department. “It was about addressing the emotional needs of students within the pandemic.”

Jessica Velez Tello, an adjunct who teaches in the bilingual education program, worked extensively with Ascenzi-Moreno and adjunct Maria Teresa Tapia to revise the program’s pedagogy and policies.

“One of the first things I did was change the guidelines and course expectations, and update the syllabus,” says Velez Tello of her bilingual literature class. “The language was less punitive. We just needed to communicate and make sure we were all ok.”

The professors agreed that one of the biggest hurdles they were facing was developing a sense of community among their students online, especially when many of them—shell shocked themselves, or sharing a space, even doing class sometimes from the bathroom—often hide their video during live class.

“As an instructor, it’s really hard for me to teach the black screens,” says Ascenzi-Moreno, who coordinates the bilingual education program. “Teaching is a human endeavor. I need the body language.”

This semester, she has asked students to at least choose an object that represents them—“something that makes you feel powerful,” she tells them, which she says helps.

A handful of courses was approved by the CUNY Board of Trustees to be offered in a hybrid format. The majority of them are at the Barry R. Feirstein Graduate School of Cinema, which has created pods to limit students’ exposure to each other.

“It’s how our curriculum works. We have classes that need to be in-person,” says Richard N. Gladstein, the executive director of the program. “And just as important, we have a lot of classes that have a production aspect and workshops where students have to shoot something, even if it’s not a hybrid class.”

He says it has taken a lot of doing to figure out how to facilitate equipment loans and set parameters for shoots.

“We tell them, ‘Shoot outside, not inside,’” says Gladstein. “The worst scene you could shoot would be two people in a bathroom; the best would be two characters in a park.”

“I think what excites the students most is the ability to be able to do their shoots. The fact that we are making that happen is almost more important than the in-person classes.”

Retooling for a Remote World

Rooted, but Reaching for the Stars