A page from coin enthusiast and independent scholar Richard Schaefer’s massive clipping collection of die from the Roman Republic. Courtesy of the American Numismatic Society.

Classics Professor Liv Yarrow has been co-directing a project that will allow numismatists, historians, and the like to access a giant database of coin die to expand their scholarship on the Roman Republic.

As Classics Professor Liv Yarrow tells it, she “accidentally” found her way to the fields of historiography—the study, and methods of study, of historical writing—and numismatics—the study or collection of coins, paper currency, and medals. Yet her career arc reveals that what happened was anything but accidental. Yarrow’s scholarship has taken her from a post-doctoral position at Oxford University’s Ashmolean Museum of Art and Archaeology to the co-director, along with American Numismatics Society’s Lucia Carbone, of The Roman Republic Die Project.

A massive undertaking, the project aims to precisely quantify the monetary production under the Roman Republic by cataloging hundreds of thousands of die—the two metallic pieces used to strike a coin’s obverse (front) and reverse (back). The first phase of the project is scanning the material in the massive archive of die research that belonged to coin enthusiast and independent scholar Richard Schaefer. The second phase is to create a database from the prodigious amounts of material that have been scanned. Graduate and post-graduate students at Brooklyn College will continue to work with Yarrow on the project in what is a third phase. The Roman Republic Die Project will be linked to pre-existing related online databases and be fully searchable.

Of course it’s not all about numbers and databases for Yarrow; she is clear when she says that coins play a serious role in enriching and confirming historical research and writing. Here she talks more about her “accidental” academic career, the Die Project, and how coins can have a vastly different story to tell than what’s in their contemporary written records.

How did you come to historiography?

Liv Yarrow: It was kind of accidental. I started as an art history undergraduate major and won an amazing scholarship in my junior year of college to go to Oxford University for a year. I was farmed out to the history department because Oxford did not have an art history major at the time. I became increasingly frustrated that I couldn’t read the fragmentary texts in their original language. I was also frustrated with the way the translators cleaned up the original text; I couldn’t tell where the fragments fit together because I was relying on the translators’ work. I realized that I was dissatisfied with relying on a translation of a fragmentary narrative past. That was probably the moment I became a historiographer. I then got invited to go back to Oxford to do my graduate work. Oddly, I wasn’t convinced I wanted to go on to grad school. I applied and got in. I’m an accidental professor; life happens to me. My alternative career was that I was going to sell [used] books if I didn’t get into grad school.

What made you specialize in numismatics?

LY: In grad school my mentor had very, very strict ideas about what sorts of courses you should take to be a well-prepared, but I came to languages late and he had wanted me to pass an exam in another field called epigraphy, which is the study of inscriptions, reading not just fragmentary texts that somebody else has edited, but looking at the stone [tablets] and figuring out what’s missing. I was terrible at it. After nine months of grad school, I walked into his office and I confessed that there was no way that a further year of study was going to help me pass this subfield. He said, “You’re an art history major. I have some people at the British museum. How would you like to go look at coins?”

At the museum I was introduced to the hard study of Greek and Roman coins. I was given a hoard from about 317 C.E., and that became my first publication, the study of some 700 coins, cleaning them off with a toothbrush, trying to read what they said, looking at handbooks, and trying to make sensible statistics out of all of it. I was hooked. I wasn’t yet a numismatist; I was pre-doctoral. But it really put me on the radar as someone who was willing to do that kind of work. I was recruited for a post-doc research position at the Ashmolean Museum. That’s where I got my first digital experience. 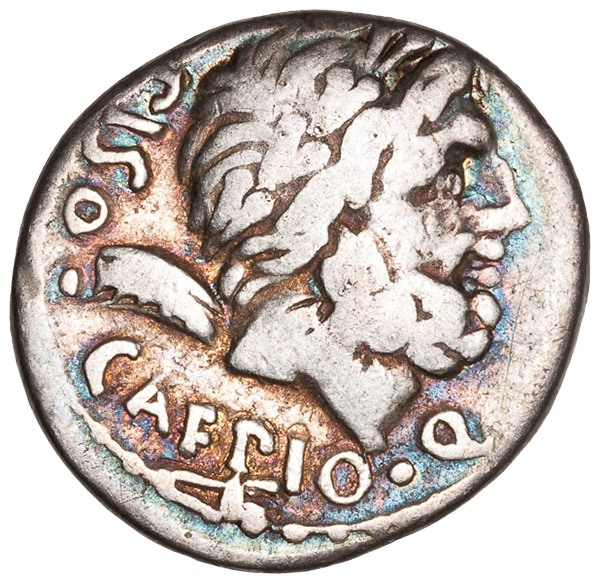 Tell us about how Brooklyn College is involved with the Die Project.

LY: I was directed to a man named Richard Schaefer by the noted numismatist Rick Witschonke. Schaefer had been collecting coins as a hobbyist—his Ph.D. was in astronomy, he worked for Boeing and supported the Apollo missions. Years ago, he sold his collection and he started buying rare books and catalogs— expensive ones—devoted to dies, and he’d cut them up. For 30 years he cut up these pictures of dies and analyzed them: We think he’s analyzed some 300,000 pictures.

I had designed a project with some Brooklyn College students to check his work—this was funded by The Mellon Undergraduate Transfer Student Program. I was trying to get a sense of how good the work was that he had done. Would we move the needle in other databases of Roman Republic die on the statistics I had generated just from his work alone? The students and I had a wonderful time. They found no errors, but it didn’t radically change the statistical outlook. But I became more and more excited that this project had real potential.

I was talking one day to a colleague Lucia Carbone, a longtime friend who is the Roman curator the American Numismatic Society. I told her that if ever I had a big grant, if there was anything I felt was important to do, it was to save Shaeffer’s paper archive not only for statistical analysis for economics, but because lots of museums and collectors are interested; provenance research is so important.

So students are still working on the project?

LY: Yes. I have student interns decoding Richard Shaeffer’s handwriting and reconstructing where he found his images. So finding either the library catalog or an online reference, creating something like footnotes. He writes in this teeny scrawl where he found the image. I have a Kurz Foundation fellowship student who’s working with me on one image and a Hunter undergraduate who is just coming on board, working with me on another coin series. I will be recruiting more student interns.

You have an upcoming book to be published this summer.

LY: It’s part of a series called Using Coins as Sources. They are books written by historians with a deep knowledge of coins, not for someone who is interested in the coins, but someone who’s interested in the history, how coins might be worked into the conversation. My book is divided thematically into what I call the four M’s. The first chapter is money. How do coins function as money, some of the technical stuff. Then memory: How does the coin work as a site of memory and commemoration and how does that operate culturally?

Then there is mutiny, because much of the period is about challenges to Roman power, either internally or externally with individuals trying to subvert the state, or people who are living under Roman dominion, trying to reassert independence and push back against the dominant power. My favorite section of the book is about the Sicilian uprisings, which I would argue is one of the earliest and best documented successful uprising of enslaved people living on the island of Sicily trying to push back and build alliances with the poor free people. The coinage shows that there was a significant portion of the Island of Sicily that was under the control of this independent state that lasted for about three years. Finally, we have mobilization, which is about how the coins speak to what might be important questions of the time: Is there going to be enough food? How do we keep the gods happy? What are my rights and how do they end up being protected? Am I allowed to vote?

Can you give us another example of how coins inform historical records?

LY: One of the things that’s exciting about the Republic, is that it all comes back to politics. The design on the coinage is like a letter seal on a document, that this is official and you should trust it. You can just spend it knowing that it is spendable within whatever confines it was issued. That’s the function of the image. If it communicates, if it is propagandistic, if it celebrates certain values, that’s the secondary function of that image.

Rome had a concept of piety that’s about honoring your ancestors, your elders, going all the way back. It was pious to put anything on a coin that either related to state religion, and the traditions and accomplishments of the ancestors. You’re honoring that tradition by saying, look how important it is to the state by putting it on a coin. The Romans had a very self-fulfilling worldview of religion, in that they were the most pious people, and so the gods make them successful as imperialists. And so the more success they have in imperialism, the more it proves to them that they are, in fact, blessed by the gods.

A “Career” of Giving Back